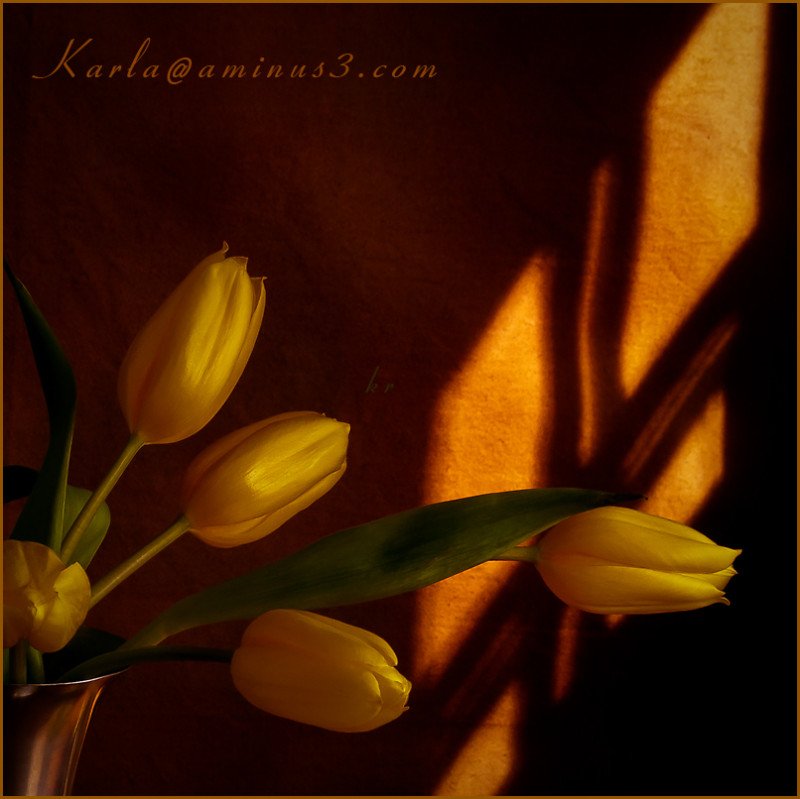 Posted by karla (Omaha, United States) on 24 February 2011 in Plant & Nature and Portfolio.

Tulips have an interesting history. They were first popularized and commercialized by the Ottoman Turks in and before the 16th century. They were eventually introduced to Europe through the studies of a highly regarded 16th century botanist, Carolus Clusius. Hired by the University of Leiden, he brought his collection of bulbs which he was studying for possible medicinal use. The decorative aspect of tulips, however, made them wildly popular with the wealthy, which raised their prices, which made them popular with traders, and which produced the economic chaos known as Tulipomania. Once the dust settled, the Netherlands was well on its way to becoming the European center for production and hybridizing of the tulip. This image is a crop from another image from the same session as http://karla.aminus3.com/image/2011-02-08.html. The background here is a dyed and spray-painted piece of muslin, sunlit from a window to the right.

@Steve Rice: Thanks, Steve, and thanks for visiting!

Warm and rich colors, great shot indeed, where the color of the tulips echo the sunlighted wall. Lovely.

@Florence: Thank you very much! I appreciate your comment and your visit.

@encore au jardin: Thank you and thank you for visiting!!

Very beautiful, love the rich colors and the window lighting.

@RBL: Thank you, RBL! I appreciate your comment and your visit!

These tulips are so beautiful... especially in that fantastic light ! Have a great day :)

@Franz: Thank you, Franz!!! Your comment is very kind and very much appreciated!

Beautiful close-up with interesting explanatory notes. I love the subject and the colors, but most of all your magical use of light!

Thanks, not only for a beautiful image, but for the interesting back story of my favorite flower. Nicely done.

@Larry Lefever: You are very welcome, Larry! Thanks for coming by to take a look. I was sidetracked by the history for quite a while. It's a beautiful flower, with so many shapes and colors available.

@john4jack: Thank you very much! Thanks for your visit and all your comments. They are much appreciated.

@Richard: Thank you, Richard! Thanks for your visit and your kind comment.

@Marcie: Thank you very much, Marcie! I appreciate your kind remarks.

I don't like very much flowers pictures but yours is simply fanrastic.
Great shot

@max: Thanks, Max! The light in this image seems to be the "main character", although I started out thinking the tulips were. Thank you for visiting!!

Gorgeous light and color in this image .

@ceanothe: Thank you! Thank you for visiting here. I looked at your blog---your images on your blog are exquisite!

A beautiful flower shot with impressive deep colors and excellent detail. The light fall on the wall adds a distinctive element that enhances the shot. Very well done.

@Don: Thank you very much, Don! I appreciate your comment and your visit.

Lovely colors and tones in this image. I especially like the light and dark. Great use of shadows!!

@Anita: Thanks! Sunlight provides some happy moments of lighting effects. Sometimes I don't appreciate them fully until much later.

Beautiful composition and light, and do you know the tip of pricking the stem (the part in water) will keep them from flopping over

@Christine: That is interesting about pricking the stem. In this image, I think the leaning tulips were important to the composition. But now I will know that trick when I want them more upright! Thanks for your visit and your comment. Happy to learn something new.