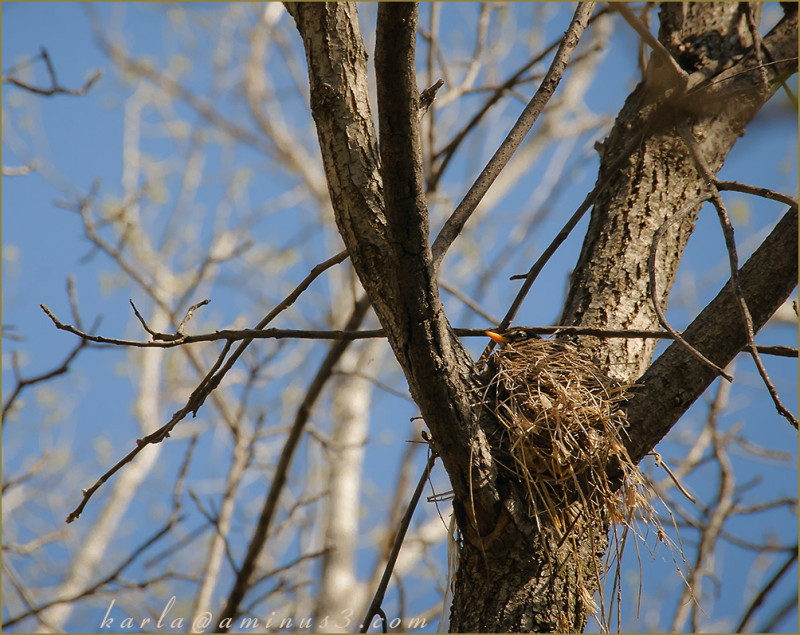 … and looking up … This is a robin (you will need to trust me on this, but maybe the beak color gives it away?) flew into the tree crotch as I was watching. It was high enough to be safe for nesting, but too high for a good vantage point for my lens. Even so, this is my first time spying a robin on a nest. The American robin (Turdus migratorius) is named after the European robin, though the latter is a flycatcher and the American is a member of the thrush family. Robins are plentiful around here, are the first to arrive in the Spring (usually in late February). They announce the coming dawn with a distinctive warble,beginning at 4:30 a.m. during the summer; after the sun sets, as dusk descends, their song bids farewell to the day. In my yard a small birdbath provides fresh water for their (and other birds') bathing and drinking; at Heron Haven, the "birdbath" is much bigger. The wetland has recorded more than 130 bird species, migratory and otherwise.

Yep, American Robins are so different from our little cheeky chappies. Lovely pic and write-up

@CElliottUK: Thanks! :) It was a nice little moment to see it.

@Aboololo: Thanks! It was an interesting moment! Thanks for visiting and commenting!!

Makes good reading as well as good viewing . . . I was about to say the same as Chris on how different the English robins are. Nice posting.

@Ronnie 2¢: Thanks, Ronnie. I wonder what the behavior differences are.

Glad to see this robin going about his personal business. A very good catch...glad you went for it.

@DULCIE: Me, too! I was glad that I had not scared it away.

although there isn't much to see of "mrs. robin", i like the way the beak peaks out from the nest! well seen and taken, karla!

@franz: I would need a very tall ladder to get a better viewpoint for this nesting spot. However, she seemed perfectly ok with me walking around below and clicking a picture or two. Maybe the sun was in her eyes...!

@Arnd: Thanks, Arnd! Robins are a favorite bird, and I was glad to have spied this nest.