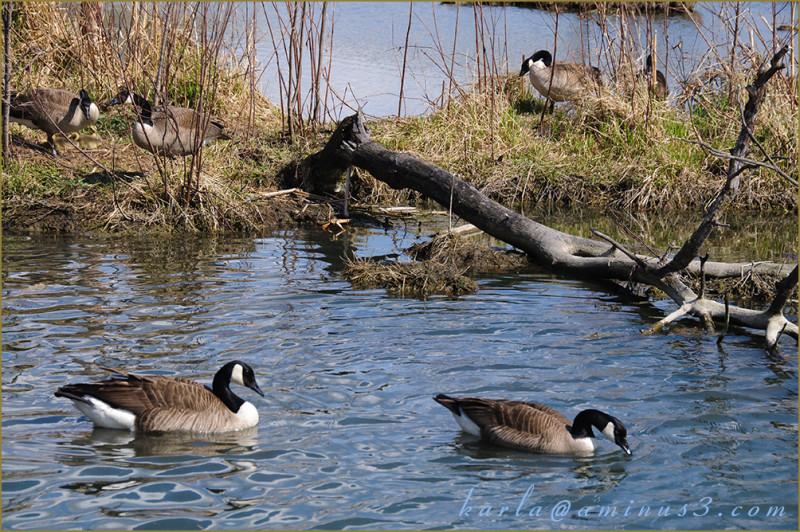 Posted by karla (Omaha, United States) on 11 May 2011 in Animal & Insect and Portfolio.

My posting has been interrupted by various matters, including a sudden 20-degree above normal (yesterday was 97 degrees F) heat wave that coincided with the house air conditioning unit not working, which then made the computer room too warm so I left the computer off. That has been followed by a series of heavy thunderstorms. The a/c is fixed but now I hear thunder again, so will need to hurry this along! I don't know what others do, but I turn off the computer and completely unplug its electrical connections when there is a bad storm. The image above is just another view. The goose family we are following are in the upper left. The parents are discussing taking the "kids" for a swim, which involves some strategic planning to prevent attacks from an enemy. Eventually you will see the cause of the danger. At the top edge is a strip of land that is actually a very small island and we will see more of it in the future. Hope this is not too boring--if so, come back in a few days for other types of images. ;-)

@Arnd: Thanks, Arnd! I appreciate your visits here and comments.

@Marzia: Thanks, Marzia! Thanks for your visit and comments. They did look contented, perhaps because for the most part, the area is a save place to raise their young. with just a few exceptions....