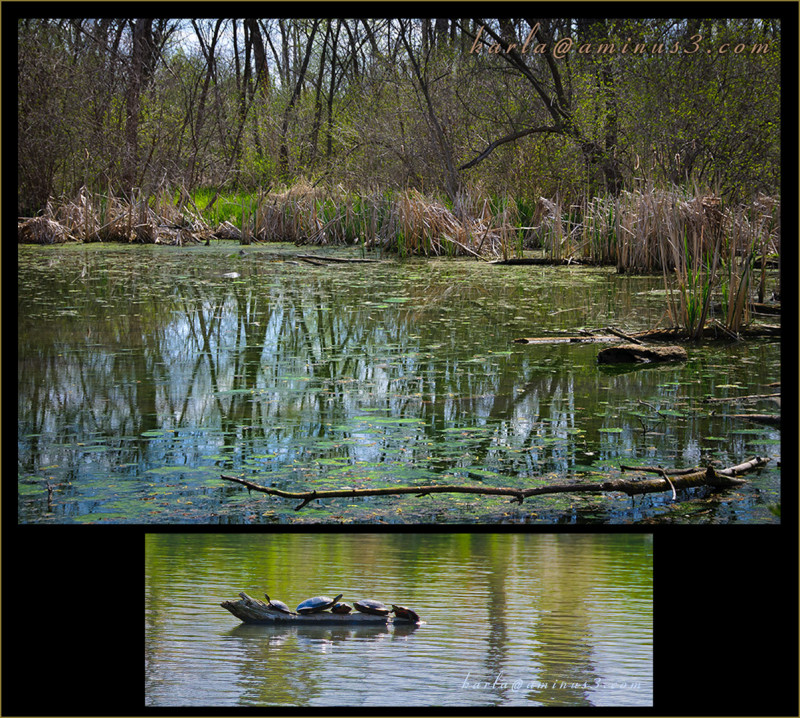 Posted by karla (Omaha, United States) on 13 May 2011 in Animal & Insect and Portfolio.

Meanwhile, let's take a look at the turtles. The top image is another lagoon in this wetland. In the water at left upper left, do you see the silvery spot? That is sunlight reflecting off the wet shell of a common snapping turtle, Chelydra serpentine. Bottom image shows, obviously, a bunch of them basking on a log, but these are in the same lagoon as the geese! Habitat: shallow fresh water ponds, shallow lakes, or streams, preferably with muddy bottoms and vegetation for hatchlings to hide in. An adult carapace (upper shell) can be nearly 50 cm (20 in) long, though the more common size is 25 cm (9.8 in) or less. The shell is dark brown, olive, tan, or black, with lighter or darker markings. When the turtles are found in ponds, the shells usually are coated in algae. The underside (plastron) is cream or yellow, often with dark markings. In the wild, these reptiles can live 30 years.

Sharp claws and snapping are their defense---snappers cannot hide in their shells because the shells are too small and their heads are too large. In the water they are generally docile, although when bothered, they will attack. Snappers eat fish, insects, frogs, snakes, smaller turtles, birds, small mammals, and vegetation. They are important scavengers, especially of carrion. One source said that they have been used to hunt for dead bodies. People catch them for stews and soups.

Did you know that the Mock Turtle in Alice in Wonderland book is not a turtle? :-) Of course you did!

Clever combination of images and interesting info about the sweet water turtles living in Heron Haven. Light, reflections and mood in the upper photograph are superb.

@Arnd: Thanks, Arnd, for your thoughtful comments.

I'm surprised the gosslings survive the snapping turtles. I like these two images as the top one shows the environment and the bottom one the turtles.

@Anita: There are so many of those turtles! I believe the gosslings are very vulnerable to those turtles. On the day I visited, some turtles were basking, but others were in the water below the surface. The parents stayed very close to the goslings, watching constantly for dangers. Not sure how a goose fends off a turtle, though.

I love how they are all lined up on the log! It reminds me of Yertle the Turtle by Dr. Seus. The big one in the middle wants to have the best view. I like the water in that shot too. I hope you have more pics of them in the future :)

@Laura: Thanks Laura! Yertle brings a smile--I had not thought of that. I do indeed have more pictures. I am just slow at posting them!

wow!! again the combination of the two images is fantastic! I love the style! and both images are gorgeous and compliment eachother well - the top one being full of detail while the bottom is beautiful in its simplicity :-)