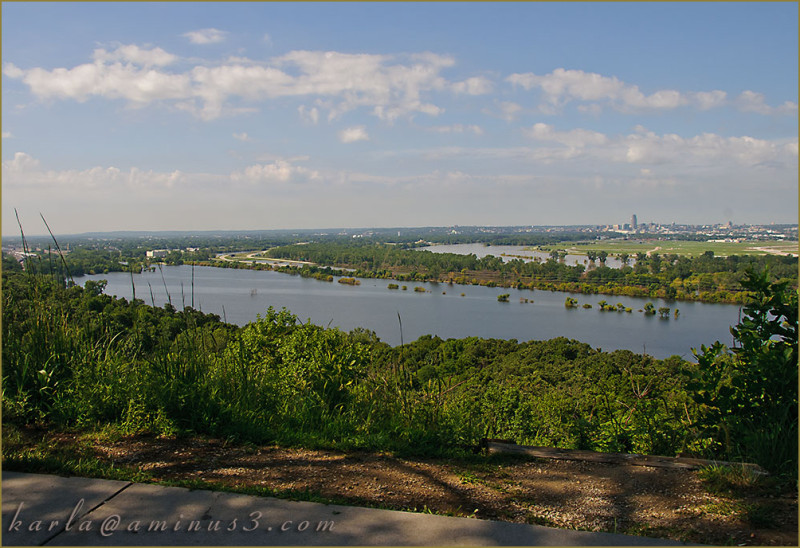 This overview of the Missouri River at Council Bluffs, Iowa, and Omaha, Nebraska is taken high up on a bluff at the Lewis & Clark Monument on the Iowa side. We are looking to the west-southwest. The river is way out of its boundaries, having caused flooding far beyond what anyone could have imagined. Omaha is on the horizon to the right. Below Omaha is a strip of green that looks like a grassy park but which is the airport. In front of that is flood water and the original riverbed and then a long strip of trees. In front of the trees is more flood water in which you can see trees. At the left end of the wider tree strip are the double white-ish lines of Interstate 29. The highway seems to disappear into the trees, but it actually is disappearing into the water and continues submerged for several miles northward. Also beneath all that water are train tracks, secondary roads, a little lake and farms.

Holy moley! Until I read your very clear and shocking description, I thought I was looking at a pretty though swampy landscape. What a severe flood scene you have there. Thank you for sharing this and your very good report of it's hidden reality. I am sad for the devastation and damage.

'Overlook' always sounds an engaging word and this view sure lives up to expectation !

nice and flat and very green! i'm sure the plains are hard to photograph - so thanks for the tall houses of the city!