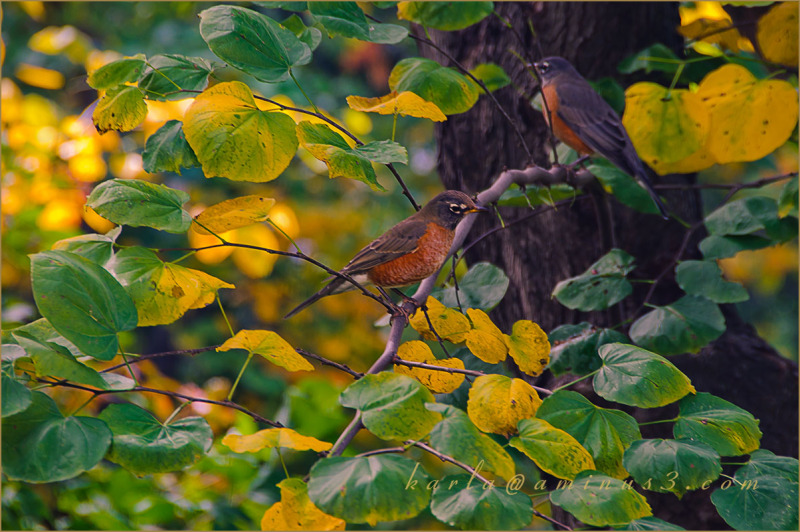 The tree again is Cercis-canadensis, commonly called redbud, with its heart-shaped leaves turning to its yellow fall coloring. The bird is an American robin, Turdus migratorius (a different species from the English robin). Robins are frequent visitors in yards, forests, meadows throughout the continent, including the US, Mexico, and Canada. Hardy birds, their presence depends on weather and sources of food and water. Nesting can produce up to three broods a year, though young are raised from only 40% of those nests and only a portion of fledglings will survive. Only half the population of robins surviving to the end of the year will survive to produce young the following year. (Statistics are from Cornell Univ. Lab of Ornithology at http://www.allaboutbirds.org) During the late summer and early Fall, diet changes from worms and other invertebrates to fruits. In late August and into Fall, behavior becomes more social and they form large flocks which migrate to areas with plentiful food, usually fruits.

@john4jack: Thanks, Jack! It is difficult for me to capture birds, since I am not out when they are, or have the right lens when I need it, or I go running out with the right lens and the birds fly off!

Yep, so different from our 'lil guys. The colours all work so well together

@CElliottUK: Thanks for your visit and comment! Your robins are smaller, I believe, from what I have read.

@Laurette: Thanks, Laurette! Thanks for visiting and your comment. I appreciate it.

I like to watch and listen to our local Robins industrious lives. A family used to nest above my bathroom window and under the roof. When I entered, the whole nest full would sound off. This is a beautiful frame with the two perched calmly and camouflaged in the gentle comp of gold and green leaves.

@Twojays: What a delight that had to be, to see the nest and hear the babies! Robins are very interesting to watch and the most frequently seen bird around here.

Sweet bird! It look like a bird over here Turdus Merula but yours is more colorfull. GREAT photo.

@Nilla´s photo shoots: Naturally I looked up images for Turdus Merula and yes, they are similar, except for color. I had no idea a thrush would be all black somewhere in the world. Thanks for stopping by and leaving a comment. I learned something today!!! :)

@Loner: Thanks, Loner!! Thanks for your comment and your visit. :)

@Manuel Hompanera: Muchas gracias! (I hope that is correct.)

what an attractive and appealing fall impression, and totally interesting info, too!
(thanks for your replies yd, karla! how interesting that you should hail from buffalo - i spent a year as an exchange student at a high school in the buffalo area, living on a dairy farm with maple sugar production, so i learned to love the fall colors there ... ;-))

@franz: Well, my goodness! It certainly is a smallish sort of world, is it not!? There are beautiful locations just outside Buffalo. We used to drive into what is known as the Boston Hills to see the Fall splendor. That had to be an interesting experience for you. Looks like I need to catch up again with everyone's blog, as I have been busy with a project for my daughter.

This shot is a real knock-out!

@B. Thomas: Thanks, Barb!!! :) Sure took awhile to get it. The birds were not landing quite where I needed them to, but after some persistence and patience, these two arranged themselves for a good shot. I learned a bit this day about what it takes to get a bird image. I have great admiration for all those birders out there (Julie Brown, for one) who make this a focus for their photography!

The colors of the birds fit perfectly with the autumn leaves! Very nice!

@Marleen: Thanks, Marleen. I appreciate your comment very much! :)

@Marcie: Thanks, Marcie. It was actually rather accidental that the birds lined up on those branches like that. And sheer happenstance that I was outside with the camera at the time. Persistence and luck! I guess that is what this is about, at times, that we happen by a scene at a good moment and can actually capture that moment.

@Arnd: Thanks, Arnd! This is one of those moments that you have talked about, that takes waiting patiently, and being available with camera at a good moment to see and click the shutter.

A very nice environmental shot, and a good way to feature this common bird. Thanks for providing all of that information. Now is the time of year when we see robins foraging in groups and massing together in the evening to roost.

@Julie L. Brown: Hi Julie! My first thought was they were grouping to migrate. After this day, they disappeared. But about a week later, there were two more stopping by. So, stragglers? Or maybe some of those who decided to remain in the area.