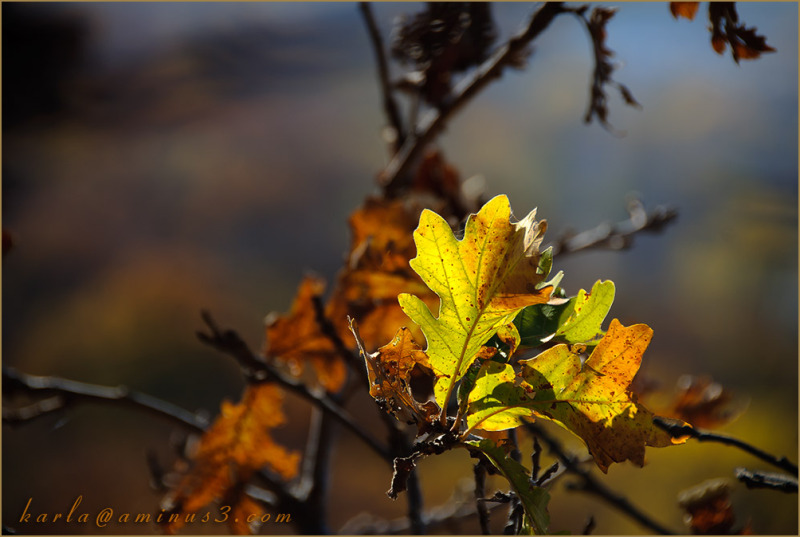 Still at the Lewis and Clark Monument Park, this very low and scrubby oak was growing along a narrow hiking path that leads away from the main (paved) overlook. I am inclined to identify it as the bur oak or mossycup oak, Quercus macrocarpa. I did not think to look for an acorn which would aid the identification, if even one was around from such a young version of this tree. There was an abrupt slope just behind it, so looking very far was out of the question! Bur oak is common in this area and native to eastern Nebraska and most of the eastern United States. It is long lived and tolerant of drought.

Light and color combo are gorgeous!

@Arnd: Thanks, Arnd! Love to see your comments. :)

@Kala: Thanks, Kala! Thank you for stopping by and leaving a comment!

This image has a real autumn feel about it...:-) Beautiful light and colors!

@Marleen: Thanks, Marleen! There is a lot of great light this autumn...I have to make myself stop going out with the camera and do laundry instead! ;)

I like the contrast which makes the oak leaf stand out so well. Nice one.

@Don: Thanks, Don, for visiting and leaving your comment. I tend to like contrast, and this leaf was lit so beautifully by the angled sunlight that day.

Hi Karla - Well, first, this is a superlative beauty here. Caught just perfectly in the light and a wonderful bit of positioning here - just a wonderful composition! I really enjoyed your previous posts about the Lewis and Clark park and the scenes that you treated us to, along with the great narrative!. I would love to visit there....Thank you for sharing with us these things that many would never see....I look forward to much more...just great! Have a wonderful eve :-)

@Denny Jump Photo: Thank you, Denny, for your comments. I will post a bit more of this park, some vegetation and also a couple of views of the monument. It is an artfully build place and well maintained. Also very popular, I think.

@Jason Politte: Thanks, Jason! Fall offers splendor, and I am looking around and appreciating it. Makes for some fun photographical moments.

@john4jack: Thanks! Thanks for your visit and comment. I am having fun this Fall with the camera.

fantastic this back light, you´ve a perfect eye for that! superb!

@klausZ: Thank you, Klaus!!! Very kind of you to say this. I love contrast and back lighting in images.

Beautiful shot. I clicked back - interesting series too.

@B. Thomas: Thanks, Barb! Glad you are finding it interesting. I am finding new knowledge, too, as I write about the place.

@BrigitteG: Thank you, Brigitte! Very kind of you !!! You have some gorgeous portrait work on your blog. :)

Really great shot, superb with the light behind.
Thank you for your nice comments, on my washing, they were really appreciated :)

@Christine: Thanks for your visit, Christine, and your comments here and on the others. I am enjoying your other images, as well. :)