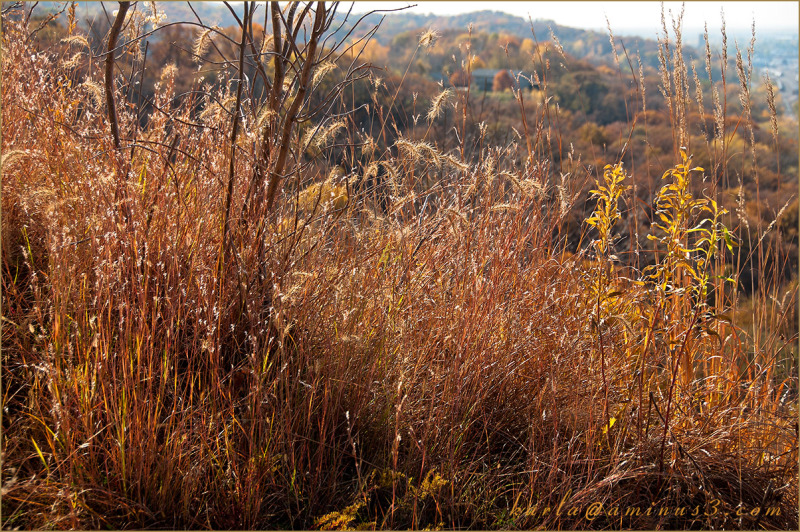 Yesterday I realized that I did not have a really good image of the monument itself. Pictures of that will be for another time, partly because I will need to go back to it and take some. ;) Meanwhile, this image shows some of the plant life around the overlook. This is similar to the appearance of the original prairie before pioneers brought their plows. Grasses and forbs mingled and competed for space and moisture. Between and around tightly placed plant stalks live insects and other critters, small and large, helping to form the prairie ecosystem.
The monument park and overlook are on the crest of a hill which is part of the Loess Hills, a 200-mile long narrow band running north and south on the Iowa side of the Missouri River valley. The Loess (pronounced "luss") Hills were formed over thousands of years from wind-blown glacial sediment. At the end of the last Ice Age, glaciers melted and drained into the Missouri River valley. The melt water carried “glacial flour” (rock pulverized to powdery consistency as the glaciers moved). The sediment formed mud flats which dried during the winters. Prevailing winds picked up the dried particles and carried them eastward. Heavier particles dropped on the eastern edges of the drainage area, eventually forming the hills on which we now build overlooks.

@rem_la: Merci beaucoup! Thanks for your visit and comment. :)

@L'angevine: The colors of the plants are lovely now and will fade to a pastel in a month or so. Thank you for visiting!!! :)

@CElliottUK: Thanks! I had a good time providing both. Thanks for visiting and commenting!!

@Jac: Thanks, Jac. Just checked your blog and saw the climb you had to make. Thanks for visiting here and leaving your kind comment.

@Maria: Thanks, Maria. It was a tough one to process, as I wanted to make it dramatic but then it looked so unrealistic to me. Late fall and winter here tend toward paleness, more subtle color. Thanks so much for stopping by and commenting.

Look at that color and detail in the foreground, and just enough background to give us a sense of scale and place. Nice one, Karla.

@B. Thomas: Thanks, Barbara! Thanks for the specifics of your comment. They are much appreciated. :)

The tones and the light are just wonderful in this capture ! Have a lovely day :)

Excellent shades of brown, great depth and perfect overall sharpness.
These myriads of details are so difficult to photograph and you did this really successfully.

@Arnd: Thanks, Arnd. I appreciate your comment very much! :)

Nice shot of prairie grasses. Thanks for the information you shared.

I love geology-thanks for the information. Any remnants of original prairie still there?

@Julie L. Brown: I do, too. There are several preserved remnants of prairie in the surrounding areas. This site is for Iowa: http://www.iowaprairienetwork.org/prairies/remaining.shtml and includes a listing per county of sites. This next one, for Nebraska, has links of interest: http://prairienebraska.org/ The following might be of special interest to you, as it is based on birding trails: http://www.nebraskabirdingtrails.com/trail.asp?trail=16

Thanks for the links, Karla. One of these days, I would like to do a prairie driving tour in summer and look for birds and butterflies.

@Kat: Merci, Kat. I can only hope to become as good as you are. You have a good eye for interesting images.