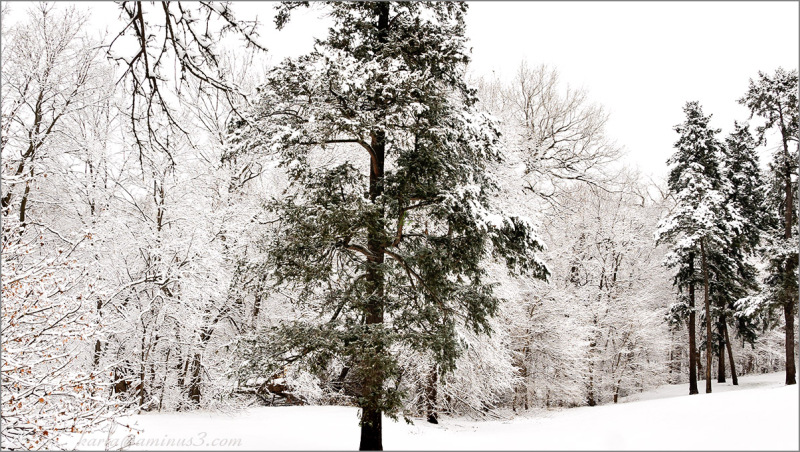 Posted by karla (Omaha, United States) on 10 January 2012 in Landscape & Rural and Portfolio.

Elmwood Park on Sunday, December 4, was well coated with snow that had fallen the previous day and through the night. Snow clung to everything (as you can see in the holiday lights series previously posted here). Sunday morning my husband and I bundled up, grabbed cameras and drove to the park to take a look. Elmwood Park was founded in 1889. It began as 55 acres, eventually grew to 208 acres, and is now located in the middle of the city. A noted landscape architect of the time, Horace Cleveland, had suggested this park as a place to refresh the senses far from the lights and sounds of the city. It continues to offer respite, though traffic flows through a central roadway and the landscape is on the southern edge of University of Nebraska--Omaha's campus. We have had no snow since that day, so this is fun to look back on.

beautiful winter image - love the snow on the branches and the clever compo with the "leafy" tree at the centre ...

@franz: Thanks, Franz. There are more winter images on the way. :)

Hi Karla - Here is another spectacular shot - Your winter scenes have been marvelous. Got your comments back and I agree, the weather is totally weird. Meanwhile out west Don Smith and Gary Hart et al are trying to run workshops at Big Sur where the weather is usually rough and this year it is mild. Who knows what is going on. As for the cold, my hands can't handle the cold (comes from when I was a kid growing up in Alamosa, CO) ...I am forever looking for that perfect pair of gloves that can be worn while operating a dslr...think I finally got some this year at Dicks...Columbia thinsulate gloves that I wear under those mitten wool ones that have the fingers with holes...2 pairs of gloves just to keep your hands warm...wow - Great stuff Karla - all the best..Denny ;-)

@Denny Jump Photo: Oh my, trying to have a "winter" landscape workshop without snow...definitely challenging! Thanks for thoughts on hand coverings to stay warm. I have the mittens with the fingers inside of them, but had not thought what to use with them. I sympathize. My fingers, nose and toes, will be the first to fall off if I am in a winter wilderness emergency. Not that I plan on being in one! I also froze my ears many years ago and forever after must wear ear protection even on 55-degree days. Thanks for your visit and comments! Oh, and also saw your New Years image in Am3's New Years collection. Nice!

Love these transformation shots . . I can feel the silence that the snowfall brings - I just wish it were not so cold !

@Ronnie 2¢: Ah yes, the silence indeed is a lovely part of this, and the experience can be almost meditative---if one is dressed for it. Fortunately, there was no wind until the evening, when we were downtown to photo the holiday lighting. Then it began to pick up and I was very glad for a warm car as a "traveling base".

a fantastic winter compo, which shows all "features" a winter offers! snow, ice, coldness, fantastic contrasts between the branches and the snow and this fascinating simplicity in colors!

@klausz: Thanks, Klaus. The diminished color made me wonder about changing it to a monotone, but there was something lost in the transition--a kind of warmth disappeared. I might change my mind in the future and do some monotones of these. Thanks for your comments! :)

A lovely winter scene. The evergreens always produce an interesting balance with the snow covered trees. If you have a vertical of this scene I would like to see it posted.Stay warm!

@James: Jim, I do have the vertical, from which this cropped image was processed. I will post for you to see, though it might be next week sometime. Thanks for the interest!