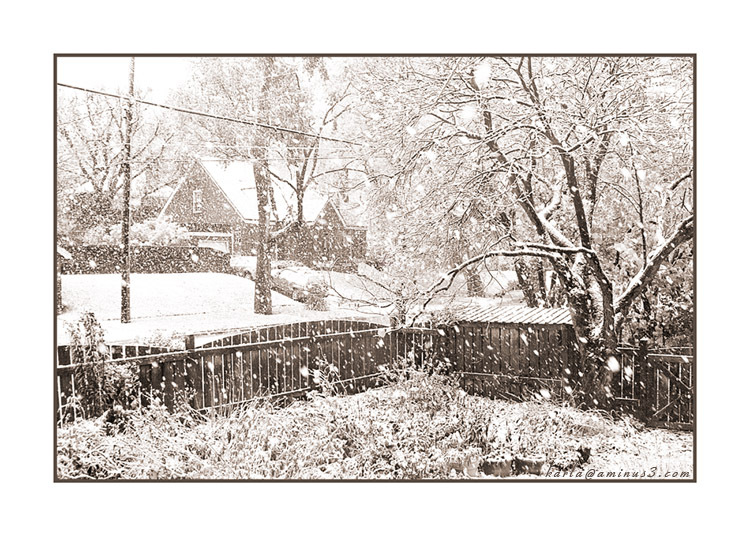 Posted by karla (Omaha, United States) on 17 January 2012 in Cityscape & Urban and Portfolio.

The first snow we had this Fall was on November 2. It came down thick and heavy, though it melted away quickly in the next day or two. Each year as I see the first snowfall of the season, I stare in wonder, perhaps due to the transformative nature of it. This day was like being inside a snow globe. Snow is my mental connection---more so than rain or sunlight---to eons past, to times in which early humans huddled in cave shelters around fires to stay warm.They felt similar flakes on their cheeks and eyelashes. Perhaps their children stood with faces upward to catch snow flakes on their tongues, just as modern children do.

Love the words you paired with this beautiful winter wonderland.

@Arnd: Thank you, Arnd. I appreciate it.

Lovely narrative here and, yes, a snowfall is a deep experience in strange ways. I love the silence it brings . . but not the mess it leaves afterward !

@Ronnie 2¢: The silence is lovely--the muffled hush, and sometimes the sparkle on some types of snow. And right, the slush, the shoveling, the grittiness from sand/gravel to prevent slipping!

A scene so familiar in a complementary tone. best…jf

@Richard Geven: Thanks, Richard! That's great, that it looks familiar. It's interesting how various architectural styles can span a country and then the world. Here in Omaha we have a vast variety. There is no one style that is prevalent, due in part to the age of the city and its location. We have it all...colonial revival (which is the brick [red] house you see here), Spanish, Victorian, Arts & Crafts, modern, current. It's quite a jumble!

Jim from Fort Worth, United States

@Jim: It does indeed! thanks for your visit and sympathetic comment.

lovely sentiments to match the image.

@Ted: Thanks, Ted, for visiting and commenting. Glad you enjoyed reading the text.

@franz: Thanks, Franz. I appreciate it! A chance look out the kitchen window had me running for the camera. But it took a few months to get processing that looked right to me.

Interesting that snow connects you with the ancient past. Lovely tones in this image. No snow here since October.

this is where you live? wow....looks like a scene from a fairy tale...so extremely beautiful, it would make a wonderful season greeting card

@Maria: This is from my back window, looking across at the neighbor's house. :) Nice idea, about the card.