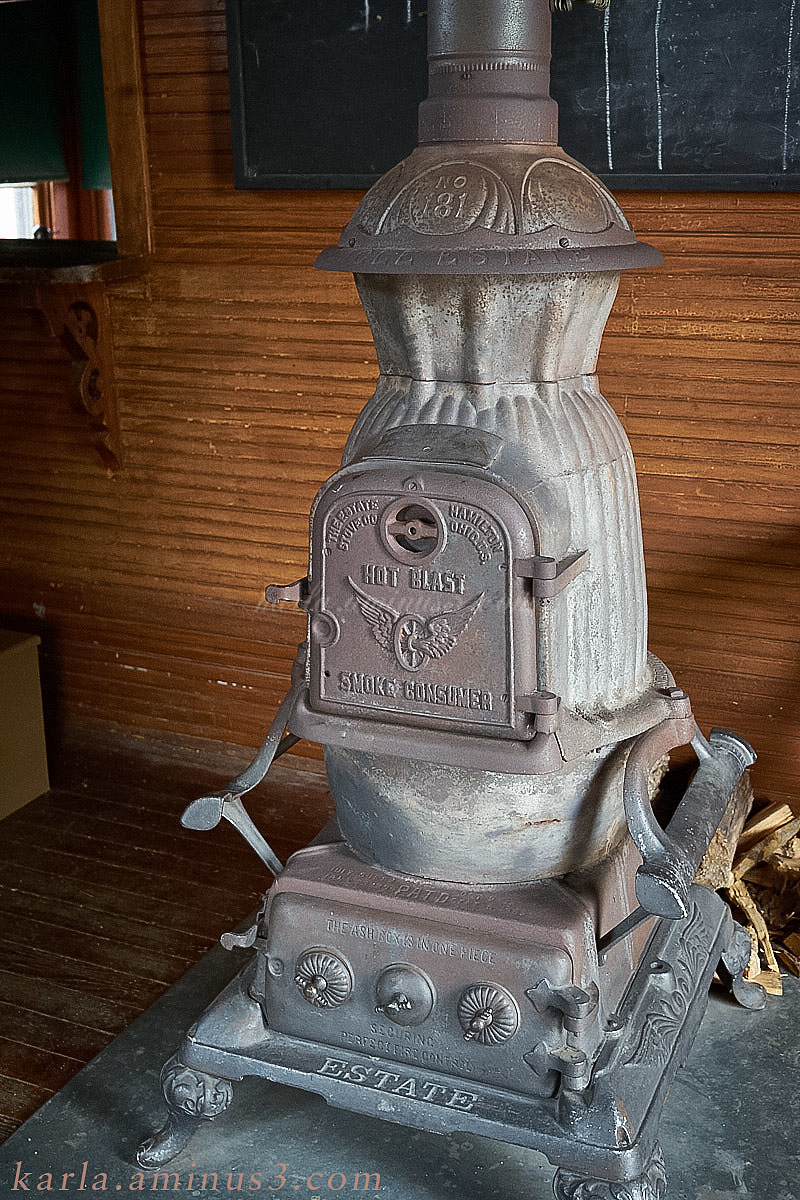 Inside the train depot, the source of warmth is this cast iron stove--the "Hot Blast Smoke Consumer". Love that! It was manufactured by the Estate Stove Company in Hamilton, Ohio, probably around 1905, per the patent dates listed on the ash box (bottom section with three handles). I have a thing for these old stoves, and loved this stove's colors which ranged from pinkish rust to a silvery blue. It sits on a slab of slate.

The history (from https://sites.google.com/a/lanepl.org/butler/home/e/estate-stove-company):
Estate Stove operated in Hamilton, Ohio, for 77 years, starting in 1885. By 1891 the factory was five stories tall, sat on 5 acres, and employed 200 workers. They made coal, wood and gas stoves that were sold in the US, Great Britain, France, Spain, Japan, and China. Employment reached 500 by 1901. Expanding in the 1920s, facilities now covered 12 acres. Its products included coal, wood, gas and electric stoves and the company added heaters for domestic and commercial customers, plus stoves designed for railroad cabooses. In 1945 it was bought by the Noma Electric Co. In 1952, they sold it to RCA. In 1955, RCA Estate Appliance Corp. of Hamilton was merged with Seeger Refrigeration Co., Sears Roebuck and Co., and Whirlpool Corp. The new name was Whirlpool-Seeger. In 1961, Whirlpool ended production at the Hamilton plant. At the time of the closure announcement, 750 people were employed in Hamilton, down from the 804 working there a year earlier. Whirlpool continues to guarantee parts and repairs for gas and electric ranges with the Estate name.

fabulous photo of this old stove

ben franklin would be proud of this well preserved antique

@Harry: Harry -- yes indeed! Thanks for your comment and for looking around the site. I will get back to posting the Stuhr photos eventually. Life kind of got in the way of things for months/years.